Argentina is expected to sign a contract on 10 November covering the purchase of 14 Kfir Block 60 fighters. The nation's air force opted to acquire upgraded examples of the Israel Aerospace Industries-produced combat aircraft, which have been non-operational for two decades.

IAI had been offering a Block 60 version of the roughly 40-year-old Kfir design, powered by a GE Aviation J79 engine. The company says the powerplant will be supplied in a "zero-hour" condition after a complete overhaul, with replacement required after 1,600 flight hours.

The upgraded fighter also will be fitted with an Elta Systems EL/M-2032 active electronically scanned array (AESA) radar, and use open architecture avionics that will allow the customer to instal other systems. Elta says the sensor provides an all aspect, "look-down shoot-down" performance, and will support simultaneous air-to-air and strike missions, with the ability to track up to 64 targets.

The nation's pending acquisition will see it join Colombia, Ecuador and Sri Lanka in operating the Kfir.

The Colombian air force has already upgraded its C10- and C12-model examples to IAI's enhanced standard, including the AESA radar and Rafael Litening targeting pod. The cockpit features a head-up display and large multi-function displays, while the type is also capable of being refuelled in flight. 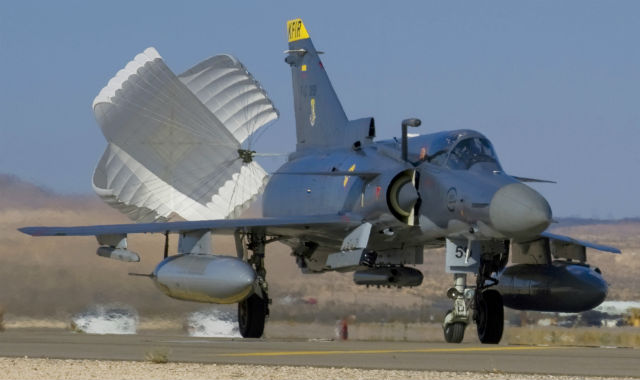