The United Arab Emirates has selected the AW609 design from AgustaWestland to fulfill its requirement for a tiltrotor search and rescue aircraft, the Armed Forces' Joint Aviation Command announced Tuesday.

However, a senior Boeing official told Defense News late Tuesday that the agreement should have no impact on ongoing discussions with the UAE about Bell Boeing’s V-22 design, as the company is targeting a different mission for the Osprey.

The selection of the AW609 gives a launch customer for the search and rescue design of the aircraft.

Delivery of the first three aircraft is expected to start in the "2019 timeframe," AgustaWestland said in a news release, while the UAE holds options on three more aircraft. The systems will be operated by the UAE's Joint Aviation Command.

"The UAE is about to sign a contract for buying three AgustaWestland 609s for the Joint Aviation Command," announced Maj. Gen. Abdullah Al Hashimi, the executive director of Strategic Analysis at the UAE Ministry of Defense. "We have signed a memorandum of understanding with AgustaWestland and wanted to announce our interest in the aircrafts, [and] contracts will be signed soon."

Al Hashimi later noted that "a contract amount has not been decided as we are still negotiating."

Added Brigadier pilot Saeed Al-Ali, from the UAE Armed Forces Joint Aviation Command, "the negotiations are still going on, the deal is almost closed, but we are negotiating small things and we are going over it and it will be done soon."

The AW609 award comes at a key time for the AgustaWestland project, given a catastrophic crash of a prototype aircraft just days ago.

A prototype AW609 crashed during a test flight in Italy on Oct. 30, killing the two pilots. Witnesses reported the aircraft descended in flames as the pilots steered away from houses to crash in a unpopulated area.

The AW609 was selected due to its capabilities and flexibility, Al Hashimi said.

"This is a longer-range aircraft, which is slightly different to helicopter search-and-rescue aircraft," he said. "The reason we bought this aircraft is because it gives a longer capacity of staying in the air, better ability of picking up the injured so the capability gives us flexibility between rotor and fixed wing."

The company claims a max speed of 275 knots and a range of 750 nautical miles for the AW609 design purchased by the UAE. However, it is possible the UAE could benefit from future system upgrades.

AgustaWestland has been hard at work trying to add upgrades to the AW609. On March 3, the Italian firm said it was planning to increase maximum takeoff weight to 18,000 pounds thanks to engine upgrades, landing gear modifications and better flight control techniques. In short, the firm said then, the AW609 would be able to fly 500 nautical miles in two hours carrying nine passengers.

The AW609 development is currently on track, an AgustaWestland official told Defense News after the contract was awarded. However, the aircraft has been not been designed to handle combat situations but to handle commercial and light operations for now.

The official added that short takeoff testing for the aircraft started last year and that the company aims to bring a maximum range of over 2,000 kilometers (1,242 miles) using under-wing fuel tanks.

He added that there is interest from worldwide customers to buy 60 of the aircraft, while the UAE Joint Aviation Command is the launch SAR variant customer.

"The two teams will be working together and the UAE team will tell us the specific requirements for the search and rescue on the 609," said Daniele Romiti, chief executive officer for AgustaWestland.

"The equipment inside will be dedicated to rescue and medical materials and equipment and depending on the kind of accommodation internally we can bring two or four strechers," Romiti added.

Al Hashimi added that the choice of the AW609 was not driven by the UAE's experiences in the Saudi-led Yemen operations, but instead is due to the "mission capability" provided by the tiltrotor design.

The Joint Aviation Command is familiar with AgustaWestland products, as it operates eleven AW139 helicopters.

The Italian Navy and Army have suggested they would be interested in acquiring the aircraft.

A senior Boeing official told Defense News that the UAE is talking with the V-22 team about "a different capability" than the search and rescue capability filled by the AW209 design.

"That's not what they're talking to us about," the official said. "We've been talking in a different direction, much more than search and rescue."

In a statement, Bell made it clear the AW609 deal should not impact a potential agreement with the UAE on the V-22.

“There was not a competition for the search and rescue mission requirement for which the AW609 was selected,” Bell spokesperson Bridget Hall said in a statement. “The V-22 and the AW609 are simply not competitors in the market – one is a civil/commercial aircraft that may eventually be certified for use and the other is a military platform that is currently in production and is in operation around the world.”

“While we cannot disclose any specifics in the case of potential FMS sales, there are ongoing government-to-government discussions about the V-22 for other missions, as the V-22 has the unique capability to fulfill missions other platforms cannot.”

The V-22 is used primarily by the US Marines, which has a standing requirement for 360 MV-22 units around the world. The US Air Force has a requirement for 52 of the CV-22 variant. The Navy recently selected the aircraft to replace the C-2 Greyhound for the carrier-onboard-delivery mission, and will buy 44 aircraft.

Before the AW609 announcement, Richard Harris, Bell's vice president for international military business sales, told Defense News that the UAE has "a lot of interest right now" in the V-22.

In addition, he said the company expects to see interest from other countries in the region, including Saudi Arabia and Qatar.

"If you take a look at some of the other Gulf states and how they've been increasing their involvement in areas like Yemen and what's happening with ISIS, everybody has a vested interest in personnel recovery, combat search and rescue. I think there's some special ops forces missions that this aircraft does very well," Harris said.

Harris added that he anticipates demand in the Pacific region in the coming years, particularly from South Korea, Singapore and Australia.

Col. Dan Robinson, V-22 program manager, told reporters during a news conference an hour after the deal was announced that he is “not that concerned” that the UAE chose a different tiltrotor platform for the search-and-rescue mission, because the V-22 has the unique capability to fulfill missions other platforms can’t.

“The quantities of the first three years from a production line, smooth flow perspective is not what we’re looking for or what Bell-Boeing is looking for,” Robinson said. “There is an opportunity with capacity there for foreign military sales to help us out there.”

The multiyear strategy, which must be approved by Congress, could reduce unit cost of the aircraft by 10 percent, Robinson said.

During the interview, Harris touted the V-22's speed and versatility.

"A helicopter sitting there cruising at 100, 125 miles an hour just can't keep up with a V-22, which can take off and ... immediately transition to be an aircraft going 250, 260 miles per hour," Harris said. "That dynamic alone … it kind of makes everything else before it obsolete. 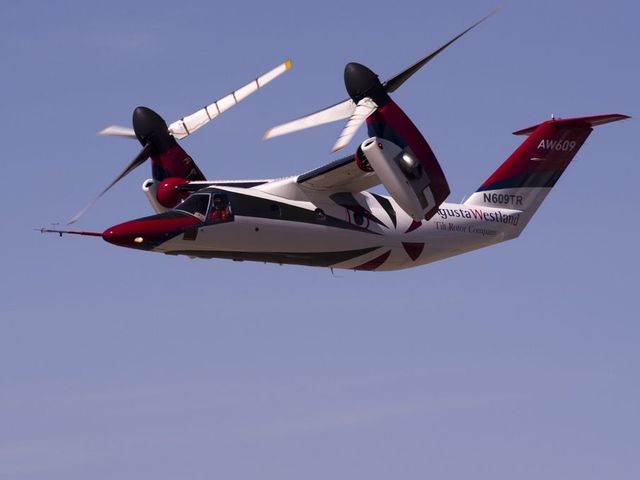