Pakistan, China To Cooperate In Space as Part of Karamay Declaration

The Chinese government has agreed to a proposal by the Federal Minister for Planning and Development Ahsan Iqbal, initiating the collaboration between Pakistan and China in space technology as part of the Karamay declaration under China-Pakistan Economic Corridor (CPEC). 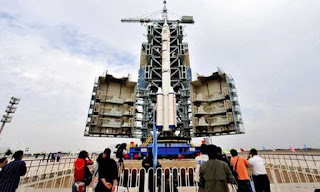 His proposal was approved and made a part of the Karamay-Xinjiang Declaration. The declaration was later approved unanimously after the two-day meeting.

At the concluding session, Ahsan Iqbal said that bilateral collaboration on space technology would take Pakistan-China relations to new heights. He stressed upon a joint launch of space missions which would consist of astronauts from both countries.

He said “CPEC will increase connectivity between the two friendly countries. It will shape up the future destiny of both the nations through communication linkages”.

Chinese Ambassador to Pakistan, Sun Weidong, was also a part of the CPEC forum. He labelled the meetings as successful in increasing understanding among the related stakeholders for implementing CPEC. He also pointed out the field of energy and communication as a major part of the CPEC.

Over 300 officials, businesspersons and public figures were a part of the two-day forum.

Another decision made at the forum was to make these meetings a permanent platform that will meet every year to examine the project and present collaboration on broader aspects. The forum will also be used to ensure the project's true objective of promoting Pakistan-China relations.
Posted by Unknown at 7:37:00 PM