Properties of the Product:
CİRİT, is a missile with the longest range in its class which provides a superior precision against light, armored/unarmored and stationary/mobile targets as well as being a cost effective solution.

Product Description:
2.75” Laser Guided Missile CİRİT was designed for the purpose of filling the gap between cheap, unguided rockets with low precision and the high cost, guided anti-tank missiles.
CİRİT can be fired from standard CİRİT POD developed by Roketsan and as well as from Smart Pod. Smart Pod increases the capability envelope of CİRİT missile for inventory information exchange through the platform it possess prior to launch.
CİRİT is stored in the canister which facilities loading and unloading.
CİRİT, by means of its aerodynamic shape and composite solid propellant rocket motor, has the longest range in its class, 8 km, as compared to classic 2.75” unguided rockets.
Moreover, CİRİT missile offers options, such as multipurpose warhead (Armor Piercing Anti-personnel and Incendiary) as well as High Explosive warhead.
CİRİT system defined as the official missile system of National Attack Helicopter (T – 129) under development and can be also integrated to various platforms (Helicopter, UAV, Land Vehicle, Light Assault Aircraft, Naval Platform). 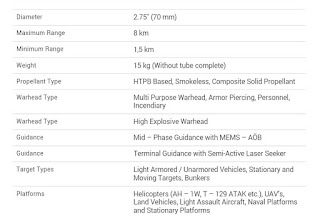